Does Indiana Have a Chance?

Indiana has been a perennial punching bag for Penn State, at least in football. Since joining the Big Ten, the Lions have enjoyed more success over Indiana than any other school. With only one win (2013), Indiana has been earmarked as a win before every season, likely with little concern given to them as the team focused on tougher opponents. The game has been a “rivalry” in only the literal sense – two teams competing on the same field for a singular available conference win. Fans are respectful of each other, and coaches exchange post-game clichés centered around a “tough, well-coached team that played hard”.

The reality is that it was hard to really care about the Indiana game under Joe Paterno. Penn State blew out the Hoosiers in three consecutive games before winning a close victory in the fourth in both the 90s and the 2000’s. Indiana did have a presence in some historic Penn State moments, as it was after the Indiana game that the 1994 Penn State squad dropped to second the coaches poll (they had dropped to #2 in the AP the prior week), never to regain the top ranking. And it was against Indiana that Larry Johnson set the Penn State single game record for rushing yards in a game (327) in 2002. 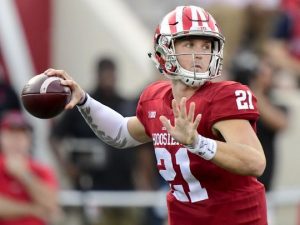 Hoosiers QB Richard Lagow has a stable of targets that can be a formidable challenge for any defense.

In James Franklin’s tenure, though, Indiana has presented a more-than-formidable challenge. The 2014 game was a defensive slugfest, with Penn State holding on for a 13-7 that saw two Sam Ficken field goals as the only scoring in the second half. After a comfortable home win in 2015 (though laced with a messy kicking game), last year’s game was nearly a loss. The Hoosiers took the lead early in the 4th quarter, and only a late surge pushed Penn State to the win.

The modern-era Indiana is not a great matchup for Penn State defensively, as Richard Lagow has a fleet of receivers that rivals Penn State’s. The Hoosiers run an up-tempo spread offense, which will keep the secondary off balance. Cornerback Christian Campbell had an especially tough game against Iowa, and will be targeted by offensive coordinator Mike DeBord. There is a chance Indiana could surprise Penn State, maybe striking quickly with a long pass. But who are we kidding…with Barkley, McSorley, Gesicki and the gang, I think it’s safe to dust off those clichés for a post-game polite-off.