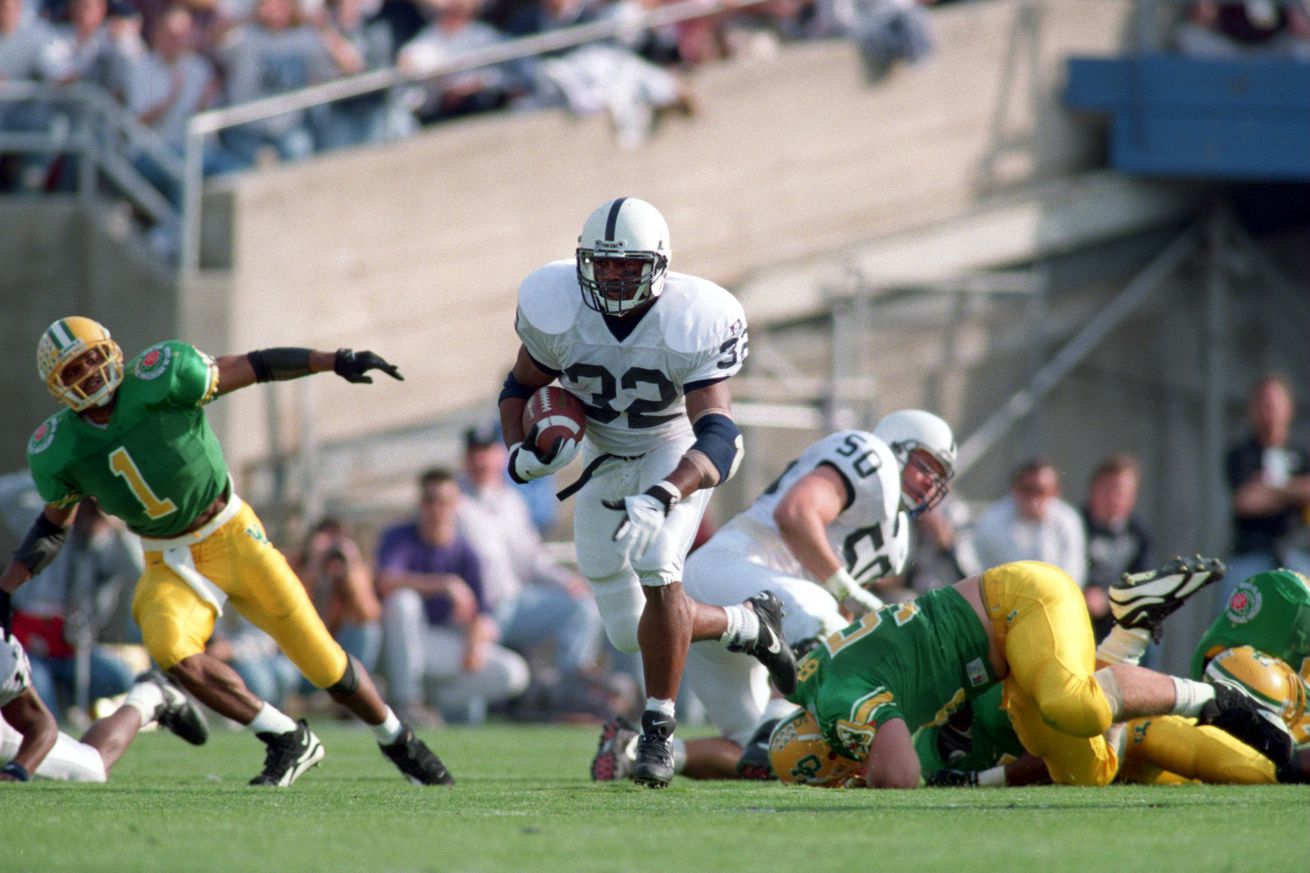 Part 2 of our roundtable takes a look at the BSD staff’s favorite moments from that magical 1994 season.

We complete our roundtable series honoring the 25-year anniversary of the 1994 season with a look at some of our staff members’ fondest memories. I’m sure there are a few that just about every Penn State fan reading this post can name off the top of their head, but I’m going to go with a moment that didn’t involve a particular play, drive, or final result on the field.

Rather, I’m going to say my favorite moment was my 10-year-old self being in attendance at the Senior Day game against Michigan State . With a few minutes remaining in the game and the scrubs running out the clock on yet another blowout win, and with an undefeated regular season all but official, the 96,000-plus fans in attendance did a variation of the “We Are” chant where rather than responding with the usual “Penn State’ they responded with “Number One.”

It was a fitting rallying cry against the AP and Coaches’ Poll voters who despite having PSU ranked first briefly in October, quickly downgraded the Nittany Lions to second in favor of Nebraska. We all know how this story ended, so I’m not going to re-hash it, but the fact I am still thinking about that random moment as an adult shows just how impactful it truly was to my younger self.

As for the rest of the staff, here’s what they had to say about their favorite memories from ‘94:

I’ll be the guy to pick “The Drive” against Illinois . Kerry Collins marched the team down the field 96 yards after trailing big (and playing uncharacteristically badly on offense( earlier in the contest. Plus, you know what position scored the touchdown? FULLBACK Brian Milne.

I’m with Lando here. “The Drive” is a great pick too – it’s the predecessor to Iowa 2017, the drive that made players famous and kept the dream alive.

But, Ki-Jana on the first offensive play of the Rose Bowl is everything about ‘94 encapsulated into a single moment. Watch the play again (and again, and again, and again) – blocking gives him four yards (shout out to Freddie Scott, sealing the edge nicely), then Carter lowers the shoulder, busts a defender, and takes the next 79. That he reaches top speed so quickly is what made him so incredible in the first place.

The 63-14 drilling of Ohio State is about as joyful as anything you’ll witness on a College Football Saturday. However, the Illinois game holds a special place in my heart. The game occurred a few days after my grandfather had suddenly passed from a heart attack. My dad’s entire side of the family spent the day at my grandmother’s house, just taking the day to grieve, share memories and laughter, and just be together.

Despite the fact that none of my other family members besides my dad are Penn State fans, everyone joined in solidarity to cheer for the Nittany Lions that day. It looked ugly thoughout most of the afternoon, but I had this confidence that the offense would eventually wake up and get the job done. And if not, it would be far from the worst thing to happen that week.

I don’t remember much of the details of the game. In fact the thing that I remember most is my cousin convincing me that my parents almost named me Ki-Jana, and me being furious that they decided to go with a more traditional name (I later realized that Ki-Jana was not actually on the list of name preferences).

Oddly enough, my grandmother passed away almost 10 years to the date- and just days before Penn State’s dramatic goal line stand against Indiana in 2004. Both games will always stick out to me as reminders that no matter what is going on in your life, a football game will always be there as a three-hour distraction and bring joy, even on the most difficult of days.

Well, as someone who was two years old for the ‘94 season I can’t say there’s much I remember! Over the years I have heard all the stories. How good Kerry Collins was, defenses failing miserably in their efforts to cover Kyle Brady, Ki-Jana Carter doing Ki-Jana Carter things, and how the team should have been National Champions.

All of that said, whenever I think of that team and what I have learned about it over the years the first thing I think of is Ki-Jana’s TD run in the Rose Bowl. Whenever I’m looking for my offseason college football fix and want to watch old highlights, that run is one of my go to plays to watch. That is easily one of my favorite plays in college football history, even if I was too young at the time to remember watching it live.

I remember the moments shortly after the Rose Bowl win. I happened to be in State College for the winter break that year, and the town was pretty desolate. After the game, the people that were there flooded the snowy streets and partied into the night. The crowds were not large like a football weekend, but the camaraderie among those who were celebrating was as though we had all just come out of the stadium together. It was a great night.

I was in middle school during this season, and one of my best friends at the time was the daughter of a Michigan alum. We’d always had our basement decked out, floor to ceiling, in PSU memorabilia while growing up, but there was no tv down there—so I lugged as many decorations as I could up to our tv room, and invited my friend over to watch the game. She didn’t really care (I mean, it’s not super usual for a preteen girl to talk shit about NCAA football), but that game was cathartic for me.

I don’t remember much action from the field, only that we won fairly handily (EDITOR’S NOTE: Penn State needed a late TD drive to win the game, 31-24). It remains a seminal football-related memory, and I still have my “10 reasons Penn State IS #1” t shirt from that season, albeit yellowed from age.